Short history of the WIART workshop

Our father, Prosper François WIART, was born in February 1903: he was the eldest of a family of six children and the heir of the family tradition in metalwork that goes as far as the early 19th century. A number of tools bears the date and sometimes our family name.

As far as our ancestors are concerned our father often shared with us the family memories that, in the beginning of the 19th century, three brothers – all three experts in metalwork and coming from Montélimar – were involved in the booming business of building sugar factories. And that activities brought them to Escaudoeuvres to build the sugar factory and eventually settled there.

Archives that we found in the workshop indicate that our ancestors were professional in mechanics: this would make sense looking at the number of tools of such trade: compas, calipers, rulers, etc. including a belt powered lathe machine.

Our father was in his early age a regular of metalshops, carriage makers and other trades that were close from home. A photograph circa 1910 shows the young Prosper, seven years of age, on the left hand side of the picture, in charge of bringing the water buckets to be used by Mr. Leblon, master carriage maker, to cool down the iron belt of the wood wheel. 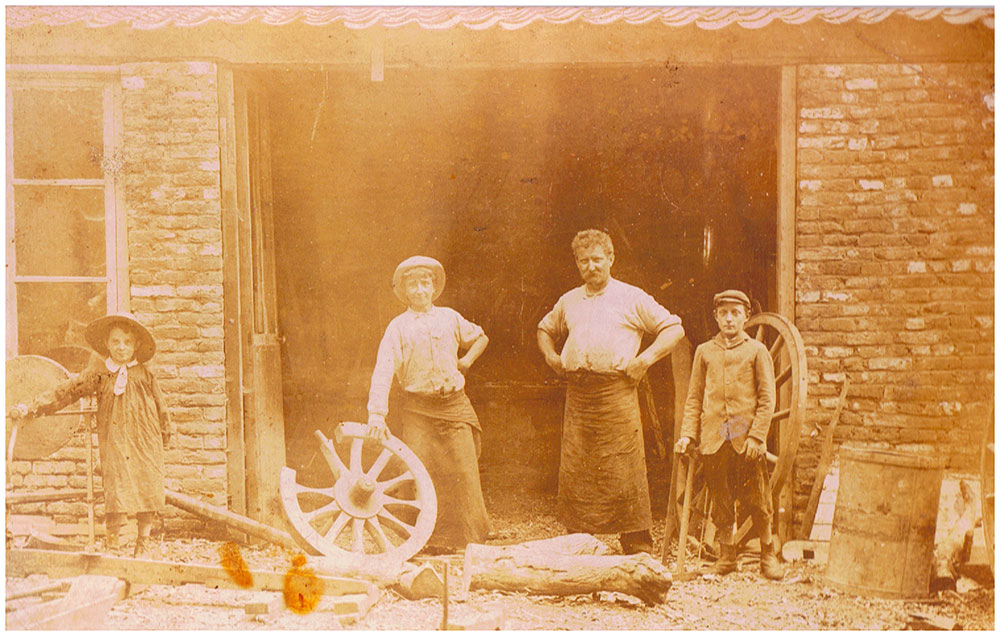 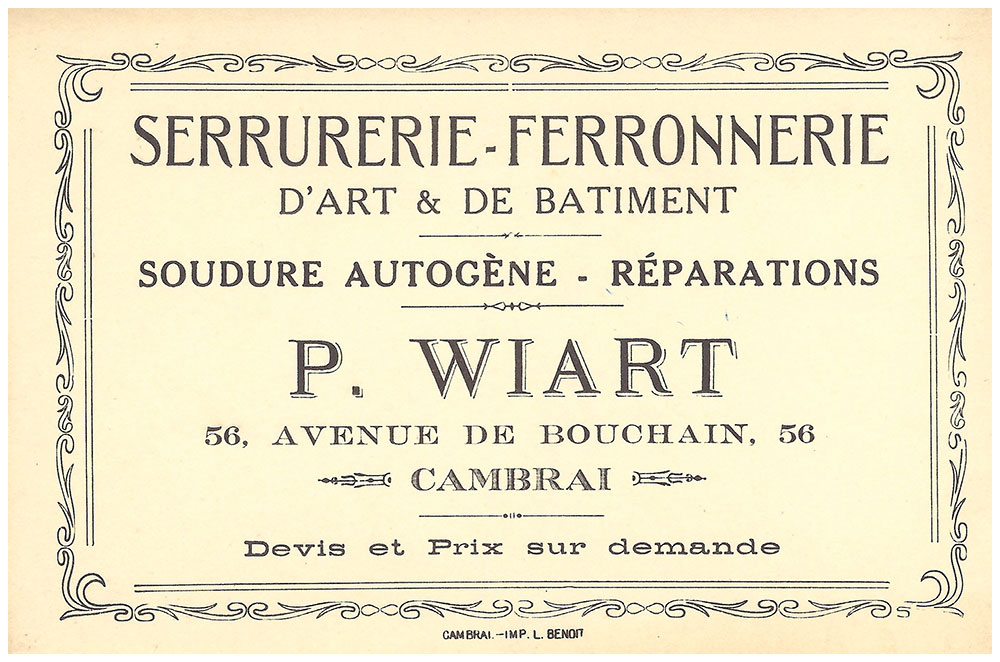 Upon completion of his apprenticeship in the blacksmith shop of Mr. Eugène Farineaux, our father did his military duties in the tanks corps that was, back then, a very new military weapon and a quite attractive one for a metalsmith. Then came the time for our father to open his own shop at 56 Avenue de Bouchain. Certificate of good standing (see document) and professional credit certificate were obtained. (See the certificate of good standing signed by the renowned architect Ernest Gaillard).

In January 1931, our uncle Clément joins the business and the Wiart brothers Metalshop would last for forty years until Clément’s retirement in 1971.

It was around that time, in 1931, that the business opened at the present address, at 70 Avenue de Bouchain, occupying the former barn of the farming business of their mother.

The Wiart metalshop is an active player in the rebuilding works of the City of Cambrai that heavily suffered from the Great War damages (see the letter from the office of architect Louis Leprince-Ringuet).

The second world war dramatically slows the business as the brothers decided not to work for the occupying forces. But, at war end, the workshop activity, despite painful material restrictions, thrives again and, for example of fine accomplishment, The Wiart Brothers craft the large entrance gate for the Morrocan subsidiary of a Cambresian seed producer, the Jules Pucel manufacturer. (see document)

It was in 1960 that the Wiart Brothers bought the Citroen 2CV ; such a practical, economical and reliable small van that replaced the antique Hotckiss truck that was acquired, years before, at the Dreye Garage, Cambrai.

Our father married Pierrette Wiart in 1951 and they had four children: Pierre, Jean, Jacques and Marie-Françoise.

The eldest son, Pierre, made his apprenticeship in the family shop after being a graduate in mechanical studies: he later made a full career in Education.

The second son, Jean, made also his apprenticeship in the family shop in the years 74/75 until mid 1978, when he left Cambrai to learn more in metalwork. (He made his full career as a metalsmith in the USA for almost 30 years).

After his passing, Jean would eventually buy from his brothers and sister their shares of the family shop prior to decide, in 2012, to revive it to a workshop as to perpetuate the long family tradition of metalwork.